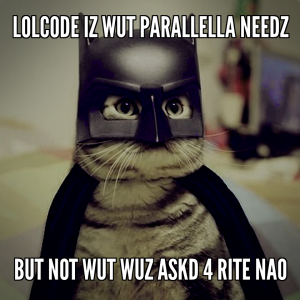 A newly developed compiler [0] and paper describing the parallel language [1] are released today which enable a novel approach to parallel and distributed programming for the many-core Epiphany coprocessor included in Parallella as well as multi-core CPUs and distributed clusters.  The LOLCODE language, originally developed in 2007, has been extended to include parallel and distributed programming concepts directly within the language specification.  The work will be presented at the 7th NSF/TCPP Workshop on Parallel and Distributed Computing Education (EduPar-17) [2] held in conjunction with the 31st IEEE International Parallel & Distributed Processing Symposium (IPDPS ’17) [3].

The compiler builds on prior work developing an OpenSHMEM implementation for Epiphany (paper: [4], code: [5]) and advances in the run-time and interoperability for Epiphany (paper: [6], resources: [7]), however these are only required if running on the Epiphany coprocessor. Strictly speaking, the LOLCODE compiler presented here is a source-to-source compiler, allowing high performance compiled code to be executed in parallel on any platform with an OpenSHMEM implementation. It was developed on Parallella, then tested on a multi-core x86 workstation with the open source reference implementation for OpenSHMEM [8], as well as a Cray XC40 supercomputer [9] used for High Performance Computing (HPC).

The language with parallel extensions is designed to teach the concepts of Single Program Multiple Data (SPMD) execution and Partitioned Global Address Space (PGAS) memory models used in Parallel and Distributed Computing (PDC), but in a manner that is more appealing to undergraduate students or even younger children.

A preprint of the scholarly paper is available on arXiv [1] and has received some very positive academic peer reviews:

The new language specification, LOLCODE 2.0 [10], corrects many of the language deficiencies that held back the language from use in high performance software development including:

The LOLCODE 2.0 compiler [0] and paper [1] describe additional details about the language extensions and include example codes such as a parallel gravitational n-body calculation and a parallel NVE molecular dynamics simulation using a Lennard-Jones potential and a velocity-verlet integrator. A simple LOLCODE 2.0 example parallel application is described below.

The code may be compiled with LOLCODE compiler, which creates the serial executable a.out:
lcc pie.lol

And the resulting binary may executed in parallel using 16 processing elements (unique to Parallella, other platforms vary):
coprsh -np 16 ./a.out

What I learned building a microprocessor chip company from scratch

What I learned building a microprocessor chip company from scratch