The story of the Parallella “Paracase” 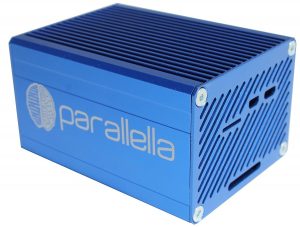 When we set out to design the credit card sized Parallella board in 2012, we knew it was going to run hot. Five Watts is just too much power to suck out of a credit card with active cooling! We thought Parallella developers would have fun creating their own cooling solutions, but that turned out to be a poor assumption..

Finally last year we realized that if nobody was going to design a low cost case for the Parallella we would have to do it ourselves. Unfortunately release to general availability was delayed due to the 24/7 Epiphany-V project, but now they are finally HERE!

The cases are in stock at Amazon (US only, international distribution to follow soon).

I have been running the 2016.11 image on my board for a week now and the temperature usually runs between 55-58 deg C with a room ambient of 20 deg c.  I have to say that it’s really nice to be able to put the board on the desk and “forget about it”.

The case is still a bit of a “IKEA assembly project”, so I put together a video below.

NOTE: Be careful to make sure only grounded metal pieces touch once you power on. (For example, one of the 0.1″ headers is exposed). Also, don’t forget, electronics deserve ESD respect.