Having cycled through each of the processors within the 16 core epiphany and run the hello world programme the next stage is to utilise the parallel processing capabilities and run the hello world programme at the same time on multiple processors. This is very simple to do and allows me to introduce a few simple concepts which we will be using very often.
The epiphany is a very flexible device in that we can segment the device into a number of regions which are capable of executing different programmes. These segments can be as small as a single core or as large as all of the cores in the device, these segments are called workgroups within the epiphany nomenclature.
For this example we will be segmenting the core up into the number of smaller work groups to demonstrate not only the parallel processing but also work group control, in this case we will use 8 work groups of two processors each. The application will move the two element work group through all of the 16 cores within the device.
The devices within the core are arranged as into four rows and four columns as shown in the diagram below 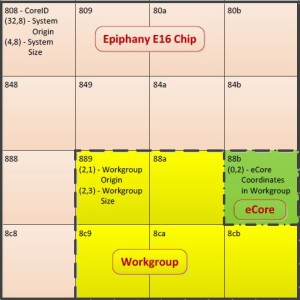 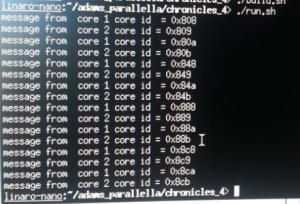 Within the Host application we need to do the following
• Initialize, reset and get the platform information as we did previously for the single core hello world. Using e_init(), e_reset_system & e_get_platform_info
• The next step is then to create work group which is 1 row by two columns wide i.e. two processors next to each other on the same row. This is achieved using the e_open command to define the work group origin and the size of the work group in rows and columns
• Reset the newly created work group
• Load the two applications into the different cores within the work group, using the e_load function to ensure the applications run in parallel once loaded the cores are not started. If we were using the same application then we could use the e_load_group command.
• With both cores loaded with their respective applications we can then run the applications using the e_start_group function.
• Each application stores its messages at predetermined memory locations, e_read is thus used access the memory location on both cores within the work group and to access the resultant messages.
The target application is again much simpler than the host application and simply uses pointers to its memory location to store messages to be passed to the host. Again all the code is available under the Parallella chronicles git hub repository.
https://github.com/ATaylorCEngFIET/Parallella-Chronicles